Whether you want to make lasting happy memories, pop the big question or just spend time together on Valentine’s Day, a long walk away from the crowds may be the perfect setting for the most romantic day of the year.

If you like the idea of a romantic ramble but are not sure where to go we’ve done some research and a bit of thinking for you. From our own experience we have come up with the following suggestions that we think would make for a suitably dramatic and stirring backdrop to a Valentine’s day walk.

For the nature lover in your life, a walk around the Gower peninsular in South Wales takes in an area of outstanding natural beauty that is both unspoilt and spectacular. 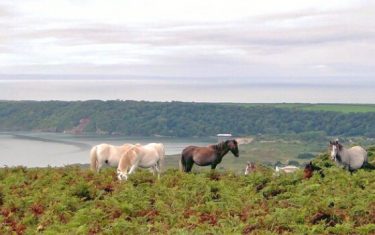 The stunning view from the top of the beacon on Rhossili down allows a 360 degree view of the the whole peninsula. Look out over Worm’s Head in the early evening and you’ll see a sunset that has appeared in a list of the World’s 10 Best Sunsets. The wild, Welsh poet Dylan Thomas took inspiration from round here too although his home is a little further along the coast. The town of Rhossili is home to many local artists where perhaps you will find the perfect souvenir of your romantic walk.

Kissing Gate: The etymology of the name is that the gate merely “kisses” (touches) the enclosure either side, rather than needing to be securely latched. Source

Though the definition lacks the romance one might hope for, there are plenty of ‘kissing’ gates on the Pembrokeshire coastal path which takes in incredibly varied landscapes and made it to number two of National Geographic’s best coastal destinations. You may like to ignore the prosaic explanation for the name of the gates and prefer to take inspiration from the Victorian custom of demanding a kiss from the person behind you for safe passage through. The walk also includes beautiful white beaches that would make a stunning backdrop to a proposal although it’s usually a little chilly in February for re-enacting Burt Lancaster and Deborah Kerr’s kiss in ‘From here to Eternity’. 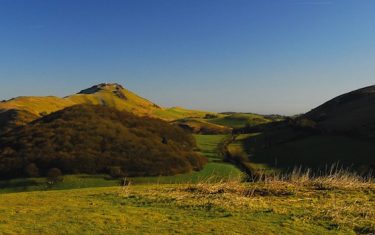 Perhaps the magic and mystery of ancient peoples would provide a better setting to delight you and your lover. A walk around the landscape in Shropshire is a walk in the footsteps of lovers through the ages. Clamber up the Wrekin and look down upon the world together from the iron age fort at the top. Nearby is Ceir Caradoc’s peak where a magical cauldron of Authurian legend is said to be secreted away. This magical cauldron of Britain is said to have contained the treasures of Britain and a magic sword associated with King Arthur and is supposedly hidden in a cave beneath the summit. Both peaks are volcanic in origin and although dormant might spark some fire in your romance on Valentine’s Day.

The incredible ruins of Tintern Abbey in the ravishing setting of the Wye valley are bound to set pulses racing. Captured in words and pictures by famous artists and poets such as Wordsworth and JMW Turner, you pass these romantic ruins by walking Offas Dyke Path. This path also takes in the Abbey of Llantony and no fewer than three Norman castles, all decaying gently to provide an atmospheric and picturesque setting for your romantic day. 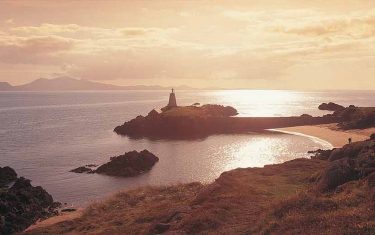 Walk hand in hand following part of the Anglesey Coast Path to romantic Llanddwyn Island inhabited once by the patron saint of Welsh lovers.
Llanddwyn means “The church of St. Dwynwen”. St. Dwynwen is the Welsh patron saint of lovers the Welsh equivalent of St. Valentine, celebrated by the Welsh with romantic cards and flowers, just as St. Valentine is on 14 February .
Llanddwyn Island (Ynys Llanddwyn) is a magical location at the far end of a beautiful beach on the southwest tip of Anglesey. It’s rolling dunes, large rock outcrops , St Dwynwens’ little church and wonderful views across to the mountains of Snowdonia all contribute to wonderful and romantic walking holiday

Do you have any special walks that you go back to with your loved one year after year? Let us know in the comments below, we’d love to hear from you!