It’s been a beautiful weekend, and I headed down to Southerndown to spend the day exploring what I’m often told is a ‘criminally underrated’ slice of the British coast. There are some spectacular walks and places to visit along The South Wales Coast Path – The Severn Estuary, the seaside resorts of Barry & Penarth and the nations capital to name a few – but this section was somewhat off my radar, and I was keen to find out a bit more about walks in South Wales.

Lately, the area has attracted attention for being the set location for a few episodes of Doctor Who – I’m no ‘Whovian’ myself, but I’m always happy to prove that there are places of tremendous beauty right on our doorstep. 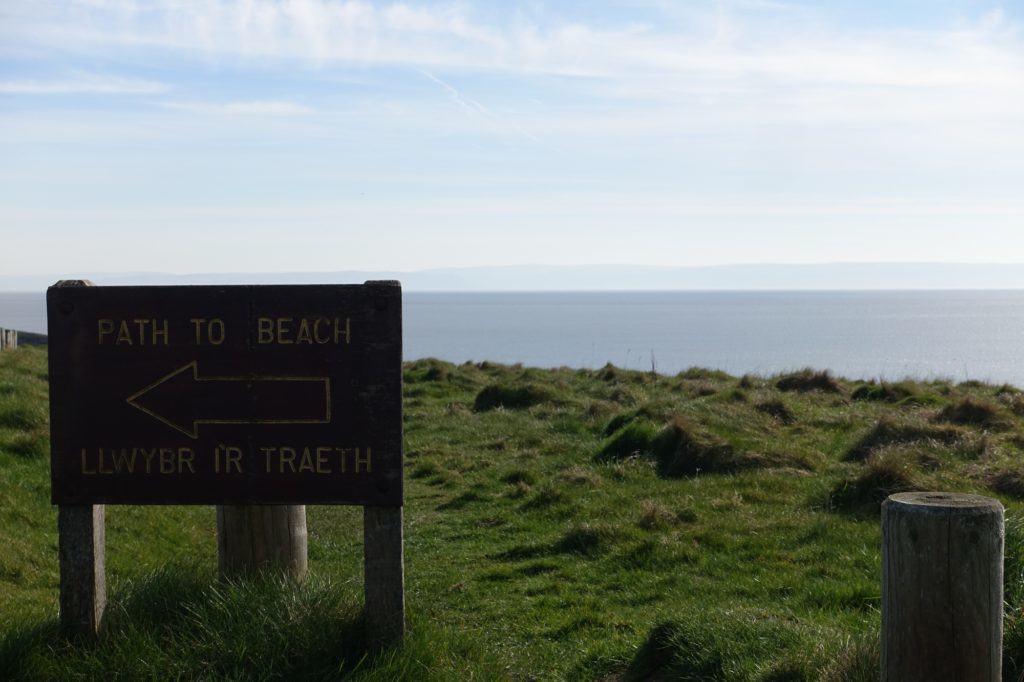 Following the path down from The Three Golden Cups with Trwyn y Witch (witches nose/point) meeting your eye-line, over masses of flowering gorse – is awe-inspiring. But following the trail down to the coast, the rock formations jutting out of the escarpment really caught my eye. It was a clear, bright day and I managed to catch the dusty, honey coloured properties of the rock in all their craggy glory! 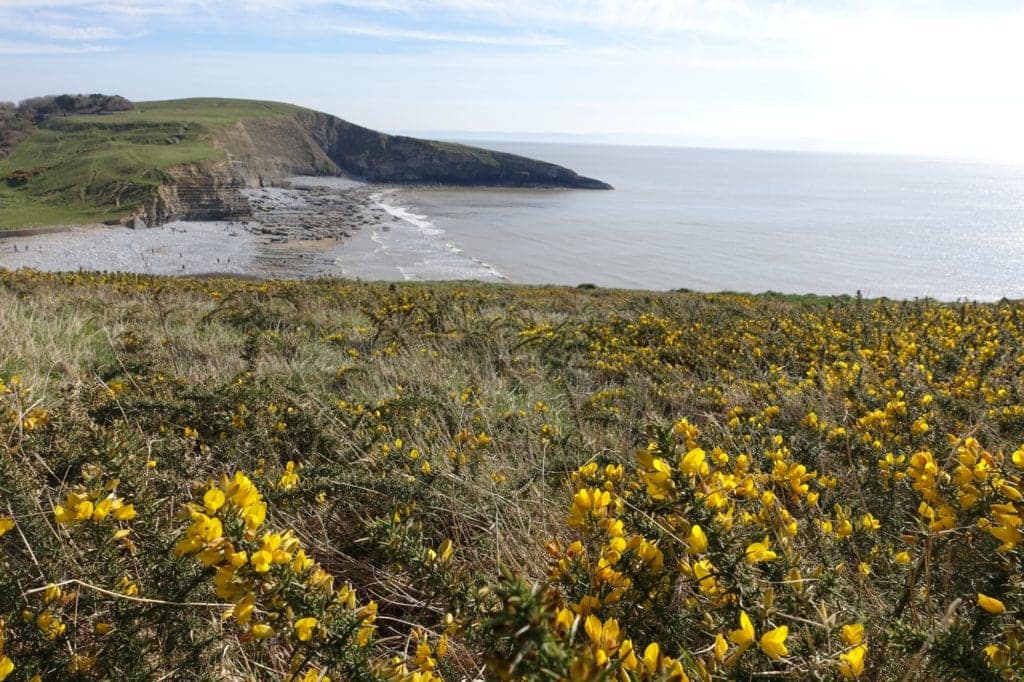 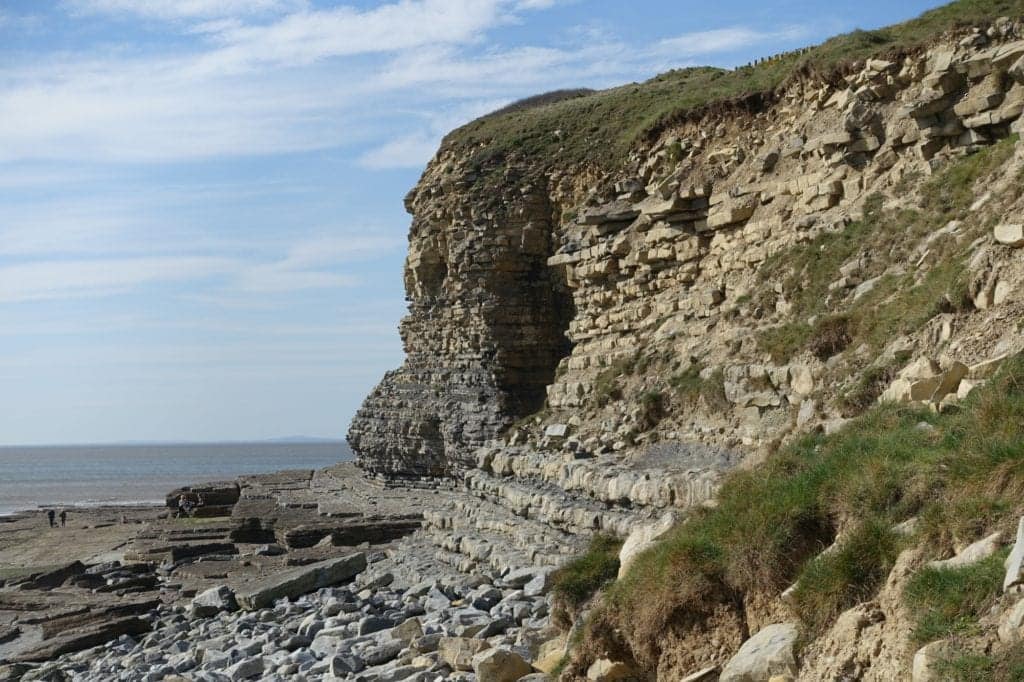 The historic gardens at Dunraven are easily accessed from the beach and are a pleasant place for a wander. On your way back on to the coast path, you’ll pass the remains of an old Iron Age fort  (c500BC). 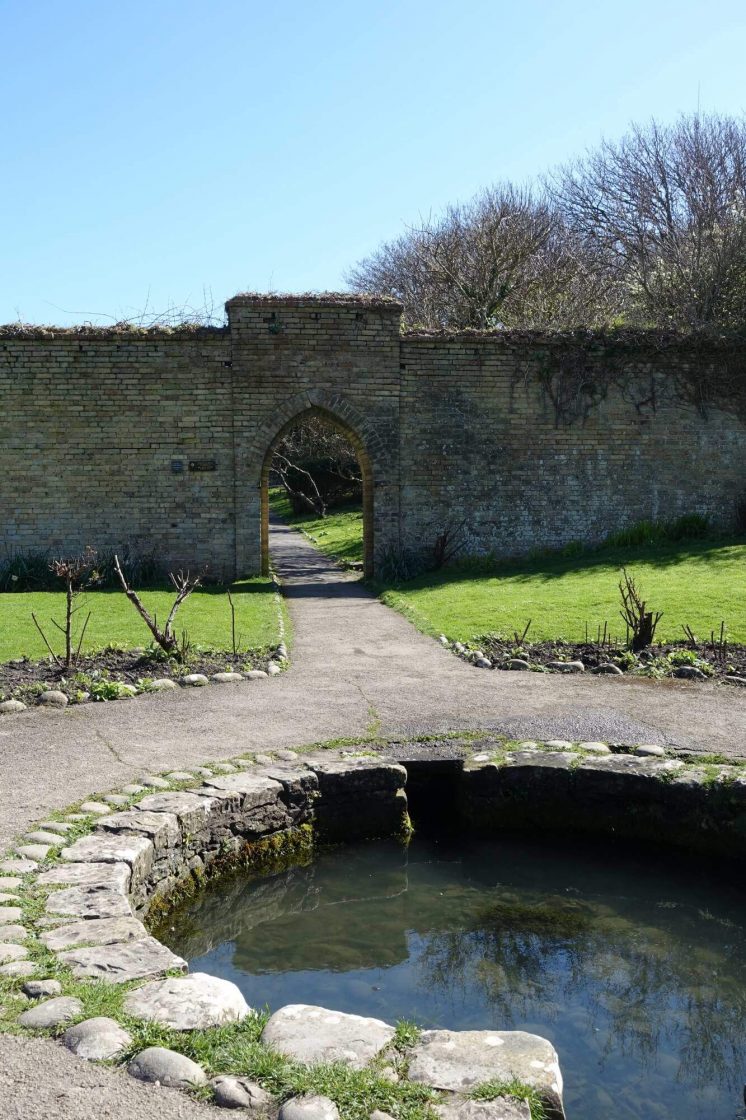 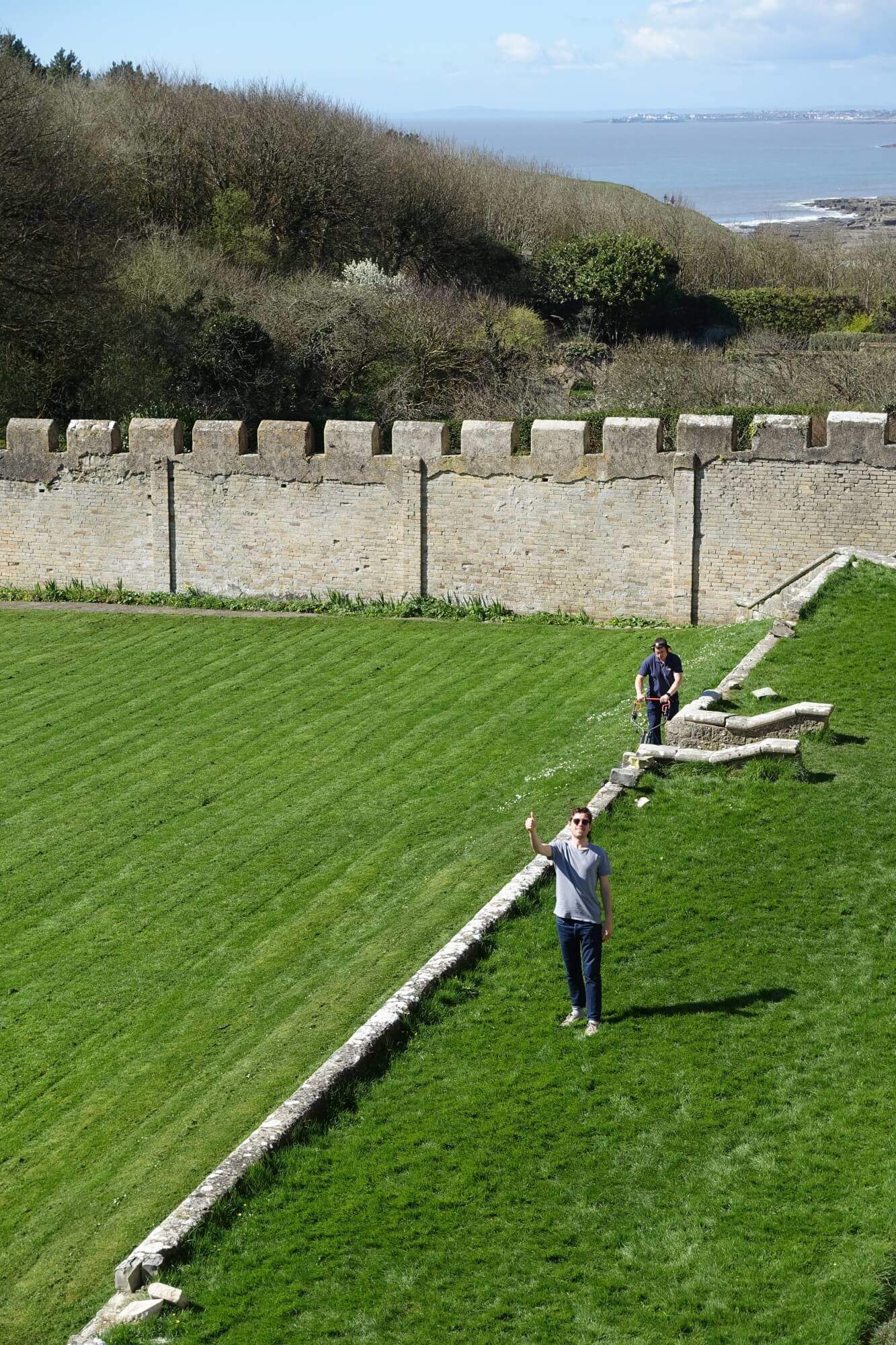 Further along the path I come across a chasm, where the cliffs are slowly crumbling and receding inland. The effects of the rapid erosion gave me a feeling of this place being in a state of flux, constantly shifting to create new jagged sides of the cliff face. 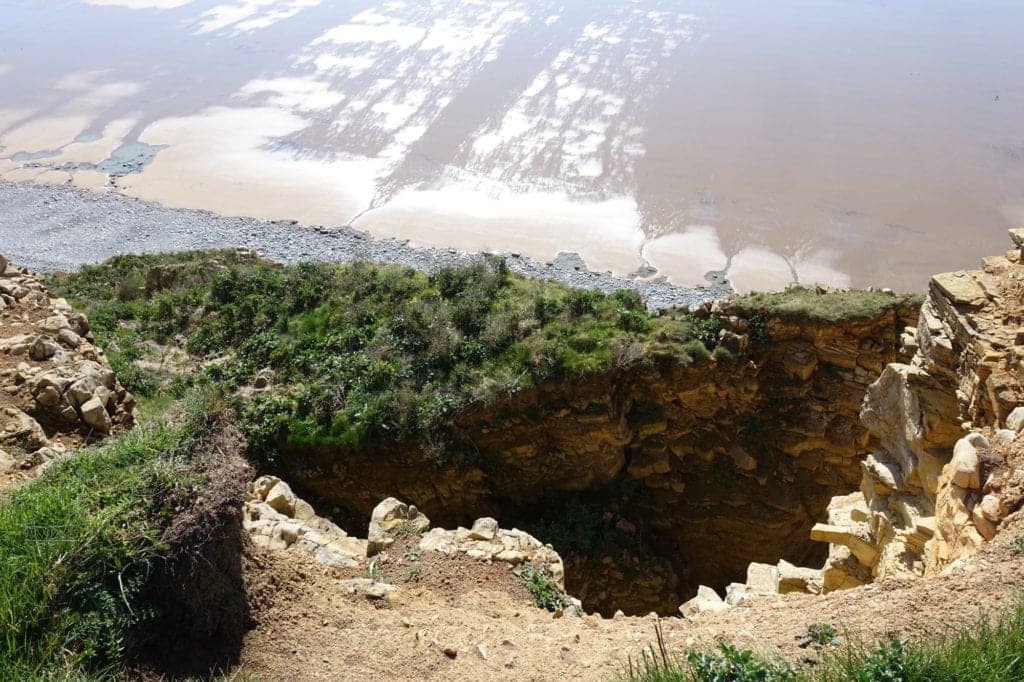 On the way over, you’ll be able to can spot a tiny stone structure perched among the slopes. On approach I thought it could’ve been an old silo or one of those second world war pillboxes you sometimes find – but I wasn’t sure (pillboxes are further along the coast toward Barry). At the pub in Monknash (a short detour inland) later, a nice old gent informs me that it used to be an old summer house, for a family who still live in the area. They put on an annual charity walk and you can find out more about the walk, as well as their cause here. Not sure if I fancy it for a summer house myself though… 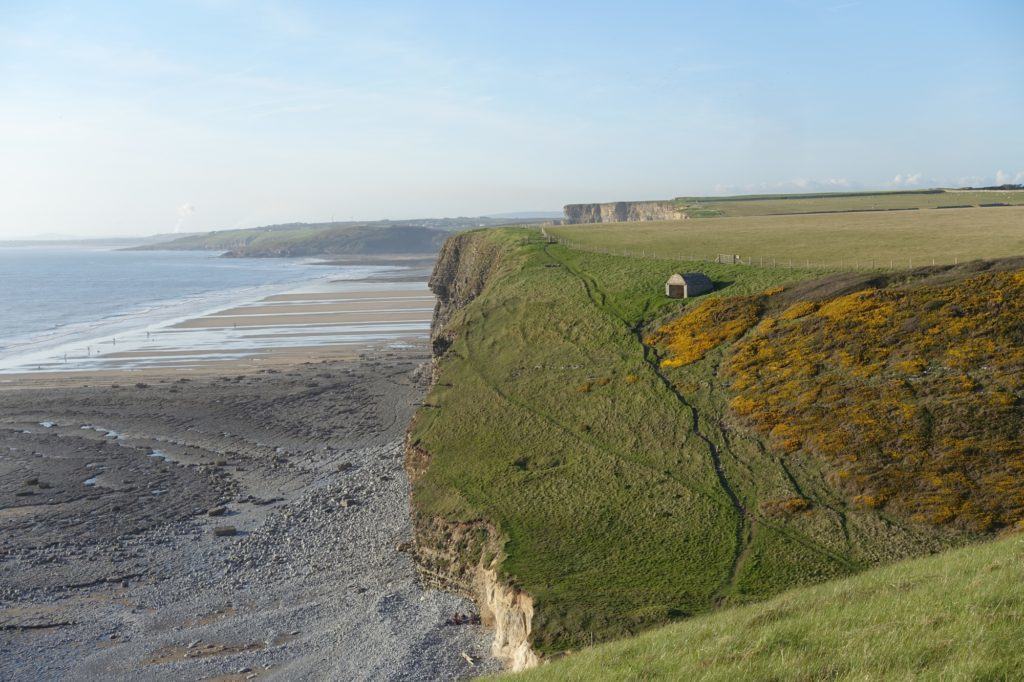 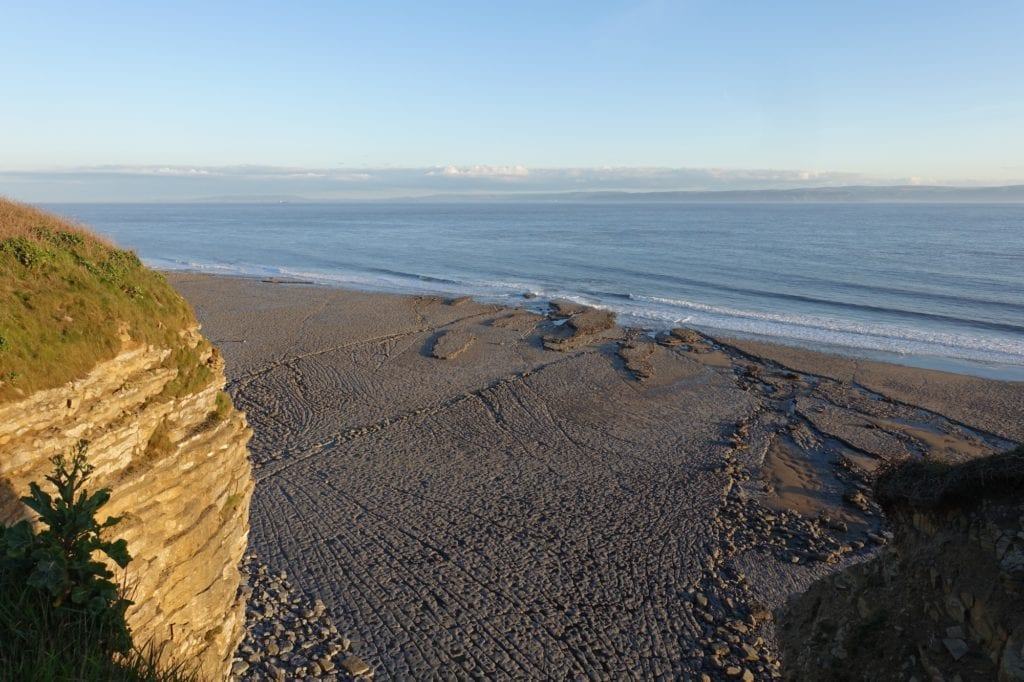 Walking up onto Nash point I notice something quite rare, an old fog horn! The sheer scale of the thing is quite difficult to convey, but hopefully the photo (with the lighthouse as a point of comparison) gives you some idea of its gravity. The foghorn serves no practical purpose today, only sounded for events, or occasionally for those ‘wise enough to pay the moderate entrance fee’. 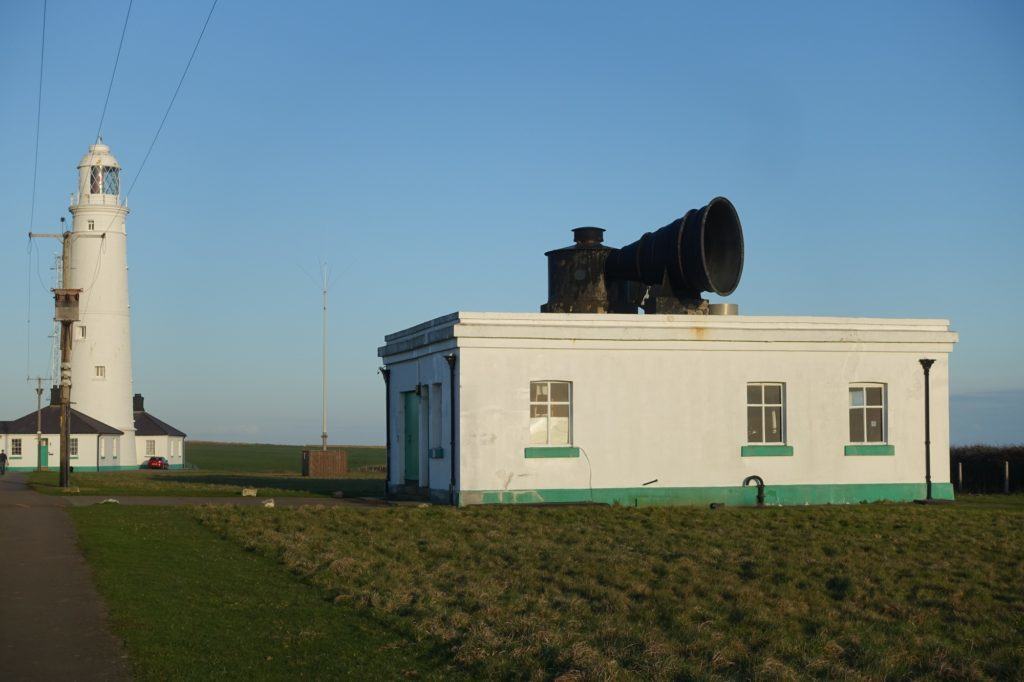 As I make my way toward St. Donats, I find the day drawing in on me. The shoreline is quite striking and I can see why this place would appeal to the Doctor Who location scout looking for a facsimile of an alien planet…it’s out of this world (ha). Up to this point, the walk itself hasn’t been too challenging – mostly level along the clifftops, with a few steep ascents and descents as the hills dip to meet the coast.

The path briefly diverts into the woods and we come out by a little harbour. Later on, another informative natter at The Swan Inn in Llantwit Major tells me that the castle at St.Donats was passed through the hands of a fair few aristocratic families until its sale to American newspaper tycoon William Randolph Heart – who threw lavish parties populated by film stars of his era. I’m also told he brought electricity to the whole area! Ever since 1962, the castle has been an international boarding school, this is apparently where politicians from all over the world send their children. 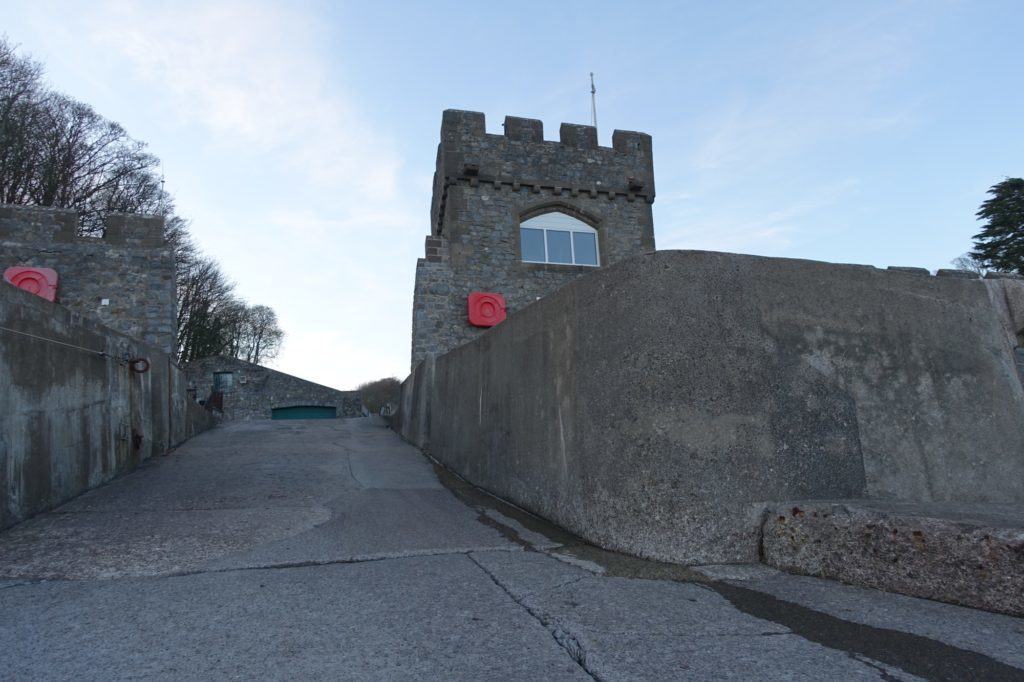 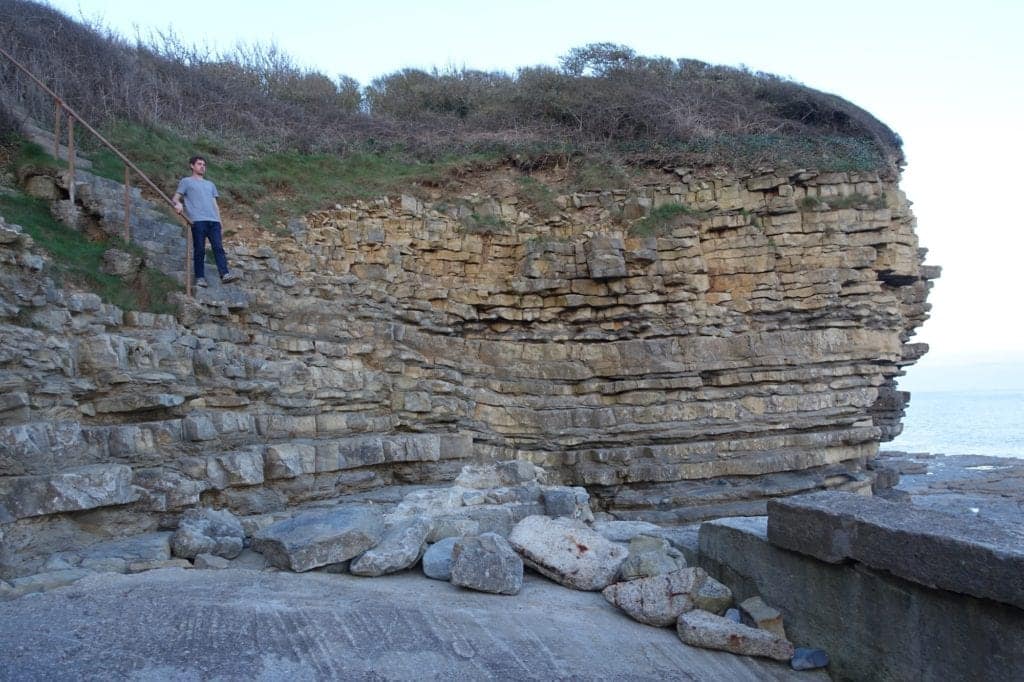 Next to the heavyweight appeal of Pembrokeshire, Gower…well the South Wales Coasts praises remain largely unsung, but this is exactly the sort of place the Wales Coast Path could serve best. The people that I met on the way were friendly, and very informative. I’ve tried to impart a little bit of what I’ve learnt, but what was clear to me from the enthusiasm (and sheer volume of material) of my exchanges was that this is a special, almost ‘other-worldly’ pocket of the Welsh landscape.

In addition to my lovely walk, I can highly recommend The Swan Inn at Llantwit Major, 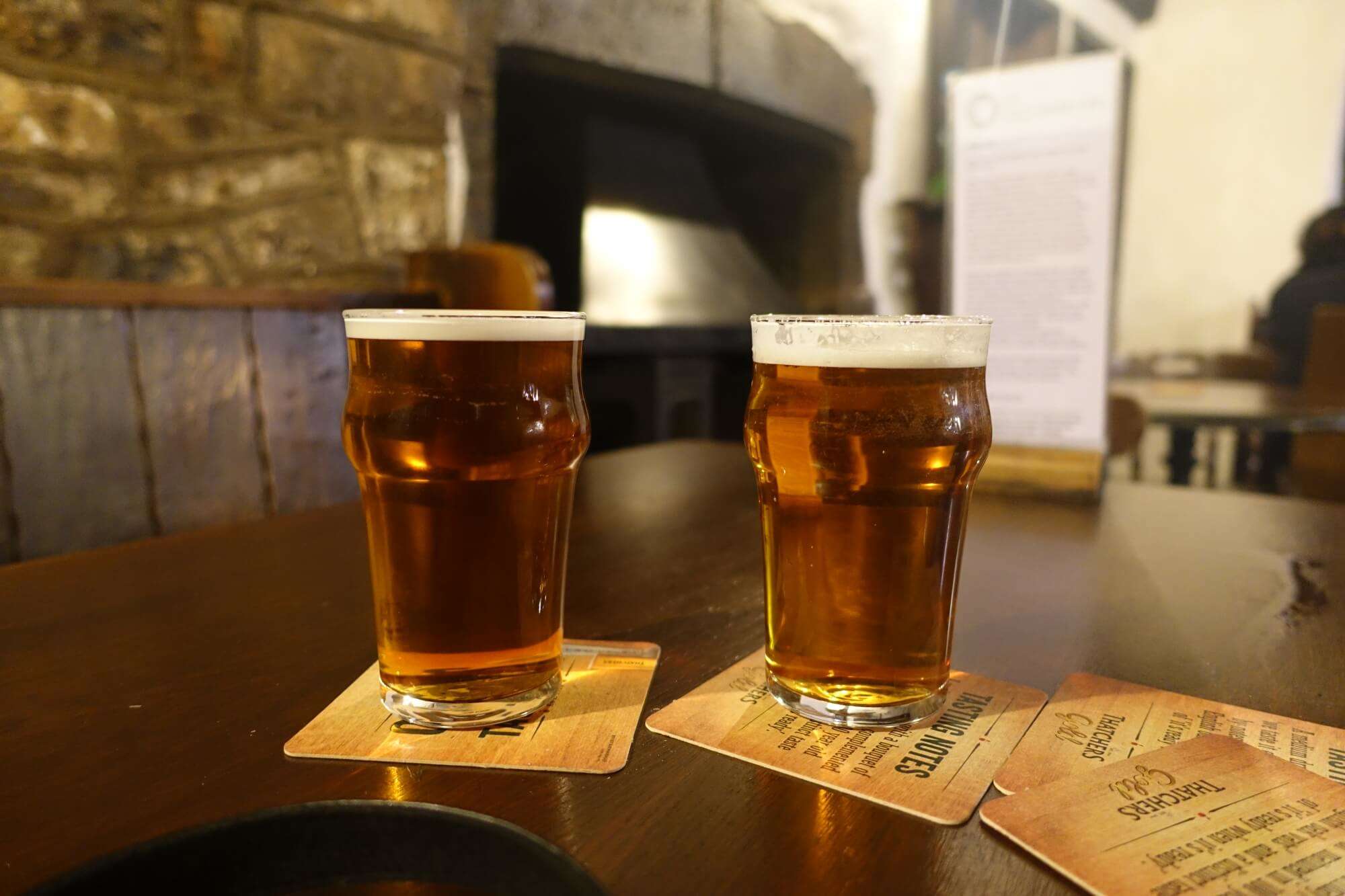 The Plough & Harrow at Monknash 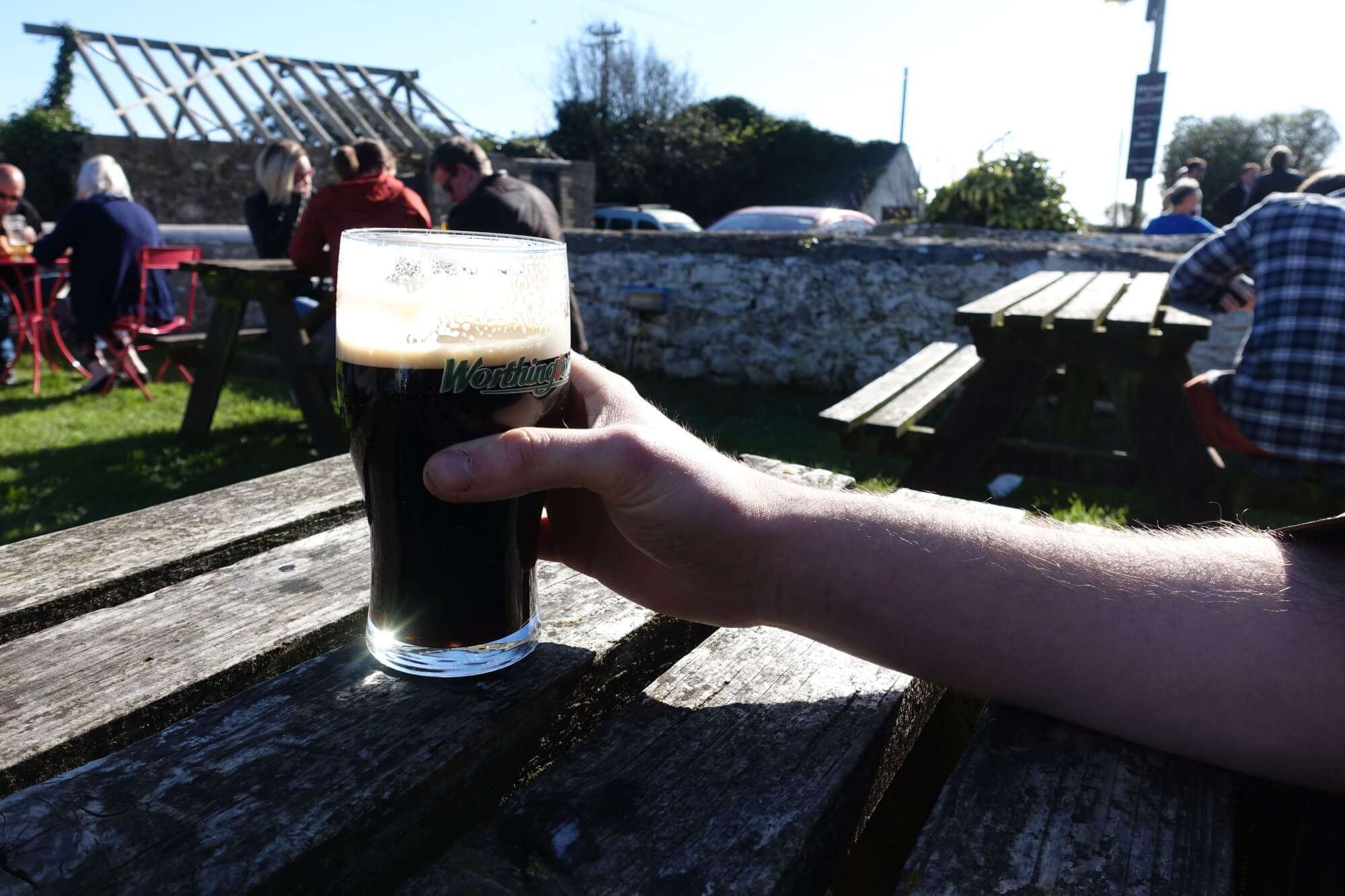 …and wearing the right footwear for the season!

If this sounds interesting, check out our itineraries for the South Wales Coast Path.