(This is an excerpt from a recent blog posted by one of our Walkers on The Great Glen Way, read the unabridged version here)

I believe I may never have explained what exactly the Great Glen Way is, so I will take a moment to briefly describe it as I had never heard of it either before I booked this trip. There is a long, well-marked hiking trail that spans the middle of the Scottish Highlands reaching from the Atlantic to the North Sea coast. The trail is listed as 73 miles in some places, 79 in others, and is typically split into six stages. Our walk is split into seven stages, since the last day would otherwise be 19 miles. We have completed four stages at this point, and with additional walks to lodging and sites, have already logged ~47 miles. The trail is a combination of canal-side packed gravel towpaths, forest tracks (more narrow paths), moorland wider paths, and logging dirt roads. In the beginning, there was almost no elevation gain. Now shit is getting real.

Today we were able to walk right out of our front door and onto the GGW trail, where we quickly left the road to stay on forest track and moorland crushed stone path for the entire day (no canal paths … yay!) The first two miles climbed quite steeply uphill until we popped out above the forest, and directly into a rain shower. I was a little bit bemoaning my fate that I had chosen to take the “high route” to enjoy the views of Loch Ness only to have the views blurred by rain clouds. Just as I was slipping into despair (I was even carrying my umbrella then as a shield against wind and rain), the rain stopped, the sky cleared, and we enjoyed a blue sky littered with the perfect amount of clouds to make views and pictures perfect.

We hadn’t been up at this height yet on our trip, and it was definitely novel to see the moors filled with heather and the views of Loch Ness below and distant mountains from the viewpoint of the Craig. It was a tough, undulating route, but not overly long, and soon we were dipping back into the dense, dark forests heading toward the village for the night, Invermoriston, which has a population of about 250 and only one restaurant for dinner. 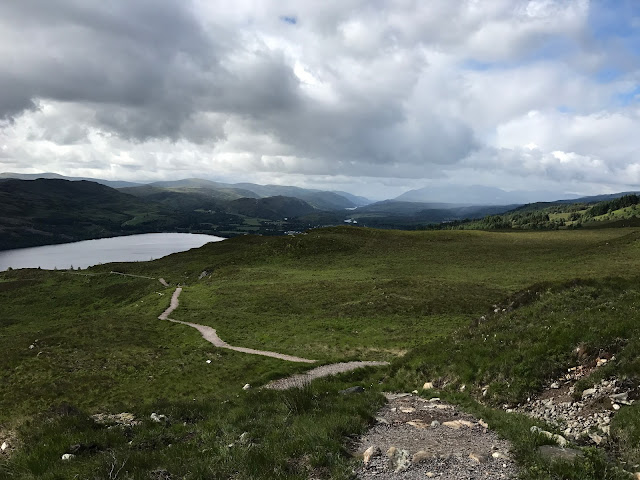 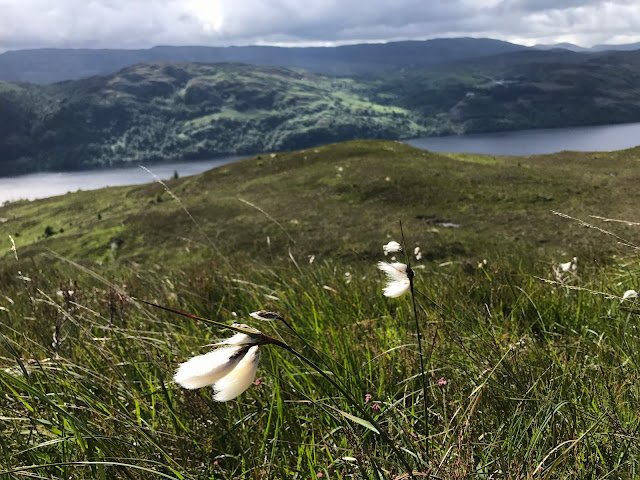 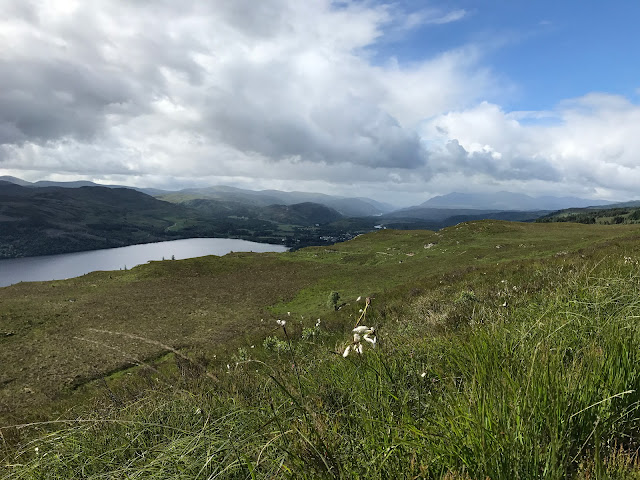 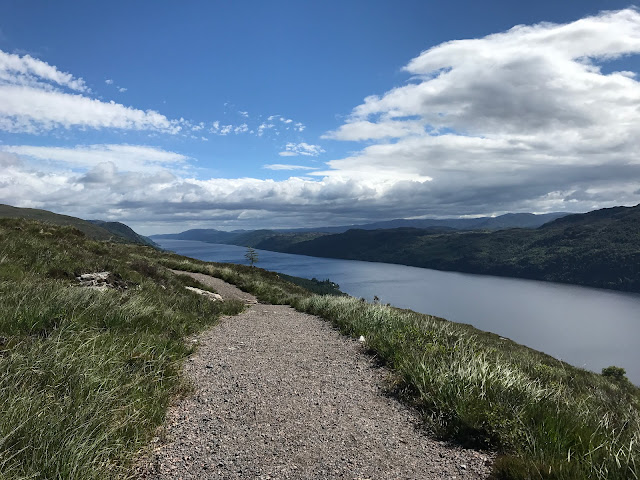 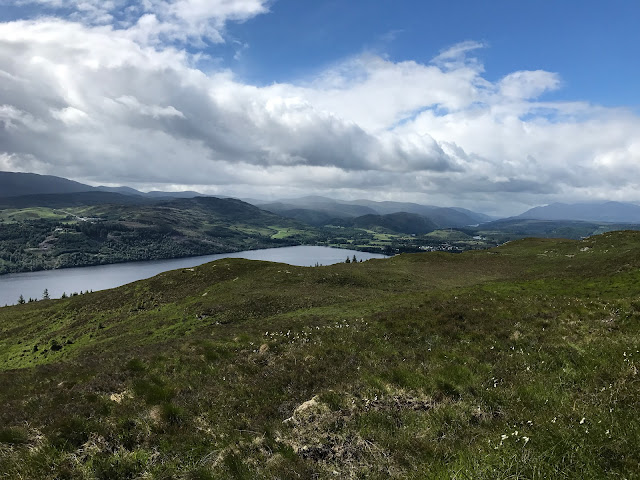 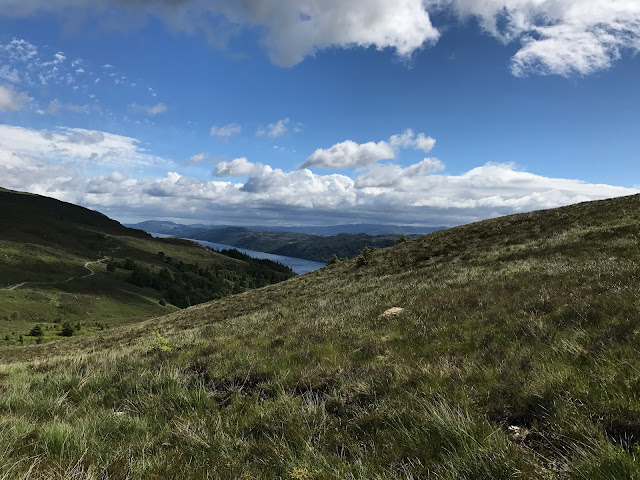 We only saw two other sets of hikers the entire day, including the family we met two days ago on Stage 2 from Missouri/Colorado, along with a solitary young man hiking extremely fast in only shirtsleeves. He was the first and only person we saw for maybe 6 miles, and we were sure he was an apparition. 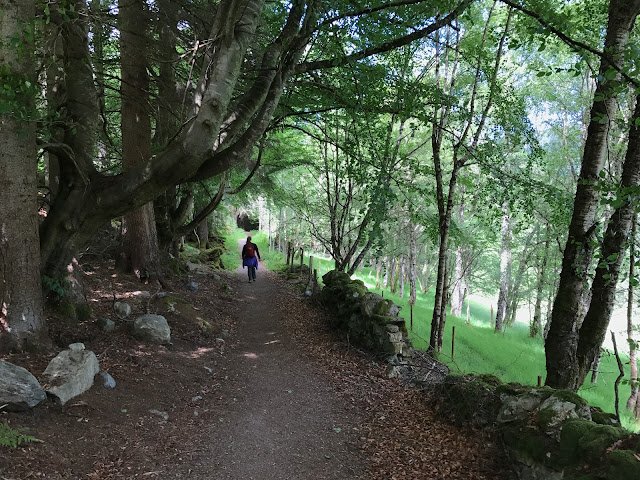 The village of Invermoriston has a pretty large set of falls right in the town, some cool old bridges, and the site of St Columba’s well. He was said to have visited the Glen in the 6th century AD and drive the evil spirits out of the spring found there. There is exactly one store that closes at 1pm on Sundays (much to our chagrin; I said surely it was only open on Tuesdays during a full moon since everything always seems to be closed when we get there). There is exactly one gift shop that sells, of all things, clogs and leather products. There is one cafe, and one restaurant. The restaurant was actually delicious, and we ate there for both lunch and dinner, where we enjoyed a wild mushroom crostini, venison casserole in a juniper/wine reduction, pea soup, and a wild berry shortbread sundae with “luxury” vanilla ice cream. It lives up to its name. We sampled a few more beers, and Lucy discovered that stout is a little more palatable to her than the other beers I’ve tried so far. 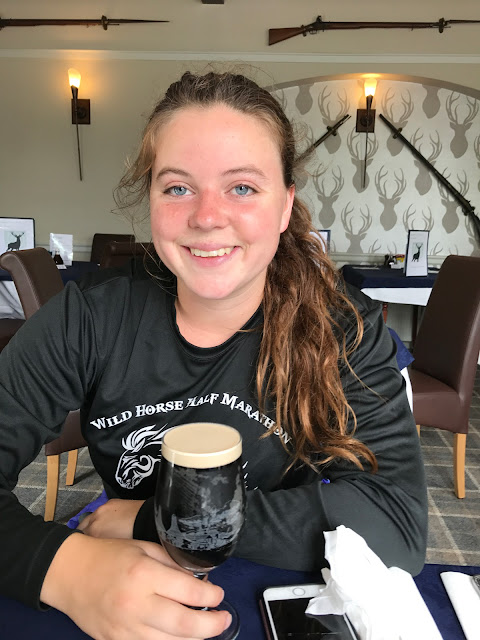 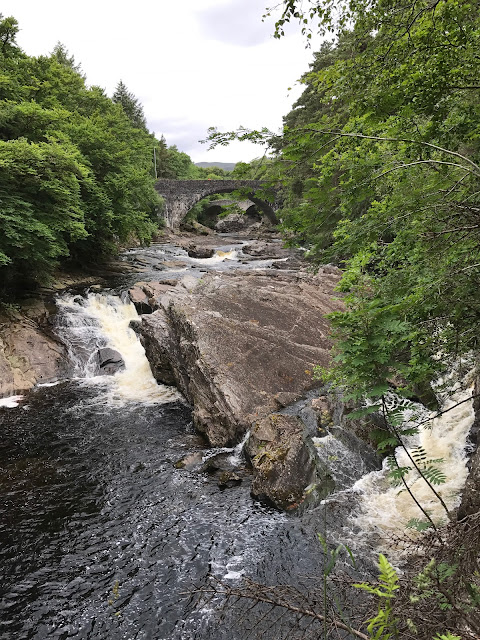 We are a little intimidated by tomorrow’s hike, which takes us back up a steep track to the highest point of the trip, traveling a minimum of 14 hilly miles to the town of Drumnadrochit. Today’s total for the hike portion was just around 8 miles.