This is a guest article written by one of our walkers on the Offa’s Dyke Path, Suzanne Schlosberg.

Off the Beaten Footpath in Wales

A while back I became obsessed with “Hinterland,” a BBC drama about a brooding detective exiled to a Welsh coastal town where nobody smiles.

Wales, as depicted in the show, was dreary, cold, grim. In other words: awesome. To me, anyway, given my aversion to anything hot or bright. Hot tubs, saunas, Florida, August — all of it zaps my energy and bums me out.

As I binged “Hinterland” on the bike in our dark basement, I grew transfixed by Wales. The gutteral language and Celtic names (Gwylim, Ffion, Delyth!). The empty roads and driving rain. The gloom!

Wales struck me as the ideal destination for summer, when everyone in our relentlessly sunny Oregon town would be mountain biking, kayaking, or floating the river on giant inflatable mattresses.

I should note that my husband, Paul, enjoys summer. He rides our trails and owns a raft. Also, he quit “Hinterland” after two episodes.

The 177-mile footpath roughly follows the England–Wales border, alongside remnants of a 140-mile ditch known as Offa’s Dyke. The path is named for King Offa of Mercia, an 8th-century tyrant who ordered the dike built to keep out invaders. (He also ordered his daughter’s fiancé beheaded.)

For Paul, an avid backpacker, our 12-day trek would provide the requisite amount of nature and mileage. I’d get to escape the July heat, hear Welsh spoken, and enjoy an outdoor adventure without sleeping in a tent. Celtic Trails would arrange our B&B stays and luggage transport.

The cherry on top: from the trail’s end, at the Irish Sea, we’d board a train to Aberystwyth, the bleak seaside town where “Hinterland” was filmed.

I’d get to visit Devil’s Bridge Falls, where Detective Chief Inspector Mathias finds the body of the elderly woman whose teeth had been yanked out with a wrench.

Paul was less excited about that than the rest of the trip.

If you are, as I was, unacquainted with Welsh footpaths, you’ll find one aspect of the Offa’s Dyke Path shocking: huge portions cut through private property.

I don’t mean remote, overgrown, acreage you’d traverse unnoticed. I mean this: You walk directly up some family’s driveway, past their Peugot and tricycles, beneath the underwear pinned to their clothesline, and across the back yard, where, for example, a shirtless man might be enjoying a cocktail. 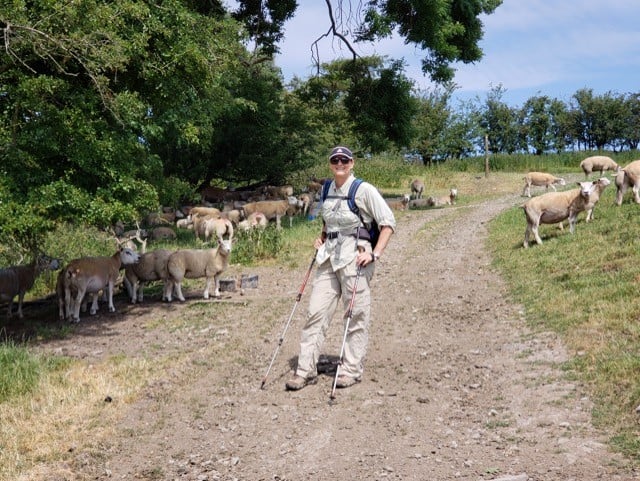 You walk through pear orchards and cornfields — not along the edge, but right through the cornstalks — and countless sheep and cow pastures. (The sheep scatter; the cows, disconcertingly, stand their ground.) Twice we ventured onto the fairways of private golf courses. The path once led us through the outdoor lobby of an industrial tire store.

Over the course of our walk, I never did shake the tresspassy feeling. After all, I’m from a country full of “PRIVATE PROPERTY” signs. (“Violators will be shot. Survivors will be shot again.”)

But the Welsh aren’t bothered by intruders with day packs.

When I’d ask, “Isn’t it odd having strangers walk past your underwear?” the locals would shrug and mumble, “Oh, you know, ancient right of way.”

It’s true: Legally, the Welsh are required to let the likes of me and Paul troll the garden. What’s more, land owners must keep their path segment “accessible and safe,” lest the trail authority bill them for repairs.

When you’re not crossing private property, you’re often walking on paved public roads. Which brings me to the second most shocking thing about the path, at least for those of us raised on superhighways: the roads are so narrow and empty you think you’re ambling along a jogging path.

But then some oddly shaped European car comes barreling around the bend, and you narrowly escape death by plastering yourself against a prickly, 10-foot hedge.

Our days on the Offa’s Dyke Path followed a similar rhythm.

We’d wake around 7 a.m. and step gingerly on the floor, surprised our feet had recovered from the previous day’s pounding.

An hour later, we’d devour our “full Welsh breakfast”: one fried egg, two pieces of bacon, one sausage link, grilled tomatoes, and sautéed mushrooms. Occasionally this was served with laverbread, seaweed boiled to a bitter pulp.

After breakfast we’d collect our packed lunches, essential since the Offa’s Dyke Path rarely passes a store. (We did find a few unlocked churches stocked with cookies for walkers. Praise the Church of England!)

What’s important to know about these packed lunches is that they’re entirely inadequate. Clearly, the B&B proprietors along the Offa’s Dyke Path have never actually walked it; otherwise they would not starve you with a meager sandwich, miniature apple, and 1-ounce bag of chips.

By day three, I’d learned to say, “Whatever you’ve planned for lunch, please double it!” I must have sounded desperate — one proprietor packed us six sandwiches. We ate them all, along with our emergency stash of shortbread cookies.

Mornings were the best. We’d set off energized, eager to see what the day would bring — mostly pastures, throngs of sheep, and stone cottages, but also surprises, like a pack of yodeling men with large hounds, on the hunt for rats and rabbits.

Around 1 p.m. we’d begin to lose steam, and by 3 p.m., when we could glimpse our destination in the valley below but knew we were hours away, a touch of trail rage would set in. (“Where the #%$* is this #%$*ing VILLAGE?”)

We’d finish around 5:30 p.m., feeling a sense of grand accomplishment, and spring to life after a hot shower. Most nights we’d dine on steak pie at a pub, exchange foot massages, and crash.

The B&Bs, including a 17th-century rectory and a stylish Georgian townhouse, were exceptional. Our favorite was a 19th-century farmhouse whose proprietor was so modest that “a television in the lounge” was the amenity highlighted on his website. When I suggested he mention, say, the grand staircase, the rose garden, or his wife’s outstanding cuisine, he replied, “Well, I’d rather people be pleasantly surprised than disappointed.”

Given the interminable stretches of pasture along the Offa’s Dyke Path, you could easily find yourself lost in thought. I suggest avoiding this for one reason: you will get lost.

You’ll probably get lost, anyway, because the Offa’s Dyke Path is not a path in a literal sense. It’s visible only on a map or on your phone via the British Ordnance Survey map app.

The only tangible indication you’re on track are wooden posts, affixed with decorative acorns, spaced about every quarter mile. Alas, you might not notice the acorns — not if they’re obscured by a hedge or the post has fallen.

Even using the trail app, we veered off track daily. Once we looped back to the exact spot we’d departed an hour earlier. Another time, to right ourselves, we were forced to climb a fence marked “ELECTRIC: DO NOT CROSS.” (It was an empty threat, as Paul had predicted.)

If you’re wondering why you can’t just follow the hikers ahead of you, it’s because there won’t be any. The Offa’s Dyke Path, to the benefit of its travelers, is not wildly popular. Our B&B hosts told us they receive 6 to 10 walkers a week.

We did come across day hikers and packs of teenagers on short overnights, plus four walkers heading the opposite direction. But the only walkers traveling our way on a 12-day plan were two maddeningly fit German women.

We’d stagger into a B&B, grubby and spent, just as they were returning from dinner, pressed and coifed. Or we’d spot them ahead on the trail. “Look — it’s the Germans!” I’d say, picking up our pace only to watch, demoralized, as they’d fade into the distance.

Pretty much the only evidence that people regularly hike the path can be found in the church guest books.

“See!” I said to Paul, one morning as we scarfed down free cookies. “People come from all over the world for this! From Israel and Japan and Argentina!”

“Right,” Paul said. “Because everyone in Wales knows all you do is walk through people’s backyards.”

Paul was cranky that day because we’d traversed several backyards and long stretches of paved roads and had encountered deafening farm equipment, a far cry from his serene mountain treks in California.

It’s true — the Offa’s Dyke Path does not offer 14,000-foot peaks or expanses of solitude. But what it offers is better: an intimate encounter with local life.

Paul’s favorite parts of the path were the wooded stretches, far from the speeding Peugots and bleating sheep. What I liked most were the 400 gates we opened or climbed over, separating one property from the next.

To Paul, the gates interrupted our flow. To me, they were a psychological boost, proof we’d completed another segment and were that much closer to the evening’s steak pie.

I also got a boost the few times I heard Welsh spoken. Only 19% of Welsh citizens speak the language, though street signs in Welsh abound, thanks to a government campaign to save the language from extinction.

Our B&B host in Monmouth denounced the signage campaign.

“When I was a girl,” she said, “Monmouth was in England. I was English. But then one night, roundabout midnight when nobody knew what was happening, there was a vote, and when we woke up, Monmouth was in Wales. And now our electric bills arrive in Welsh, which is quite ridiculous because nobody here actually speaks Welsh.”

She added: “I don’t wish death upon the Welsh language, but really!”

Perhaps what I enjoyed most about the Welsh countryside was how old everything was. A trailside historical marker might span five centuries in a single sentence, recounting the granting of a lordship in 1282, a 1536 castle refortification, and a 1789 act of Parliament.

For me, the trek’s only disappointment was the pronounced lack of gloom. A two-week heat wave brought sunny skies and 81-degree temperatures. Tabloids blared: “WORST HEAT SINCE 1976!” 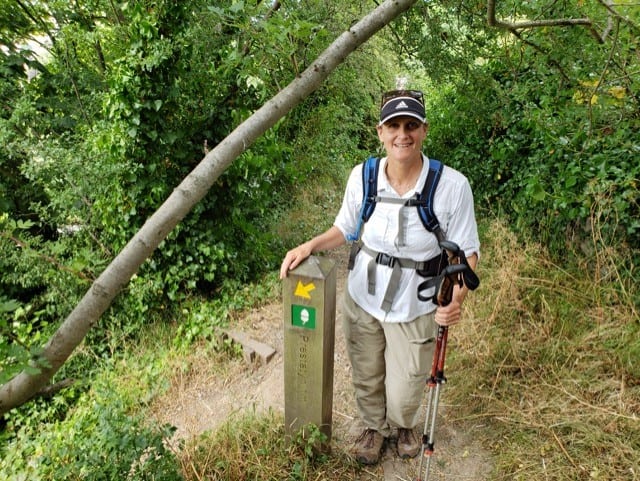 On the final day, we followed the Offa’s Dyke Path to its end, at the shore of the Irish Sea. There we ran into the Germans, who had, of course, already showered and eaten.

The next morning, we boarded the train to Aberystwyth, a town far less bleak than depicted on “Hinterland” but worth visiting, anyway, for its seaside promenade.

From a gift-shop owner, I learned I was not the only tourist to have been lured by the show. A Belgian man had become similarly obsessed and booked a trip for his birthday.

“So two people in the entire world had the same idea?” he said.

I ditched Paul to stop by the visitors’ center for directions to various filming locations. The clerk, a “Hinterland” fan, was elated by my inquiries, which prompted a satisfying, if fragmented, conversation:

“And murdered girl in the red dress!”

“The restaurant where DCI Mathias meets his wife!”

In the end, even Paul got caught up in the “Hinterland” excitement. We took a 1920s steam train to Devil’s Bridge Falls, where the show’s gruesome first episode was filmed. It was Paul who first spotted the bridge.

“That’s where the the blood was found!” he said. “On the railing!”

About the Author: Suzanne Schlosberg
Suzanne is a content writer, editor and author.  She and her husband, Paul walked Offa’s Dyke Path with us in June 2018.  You can find our more about Suzanne and her work here SuzanneSchlosbergWrites.com