We would have made you a cake, but you’re an inanimate object. Here, have a blog post instead.

May 2013 marked the 10th anniversary of the 84-mile national Hadrian’s Wall trail, one of the most  famous walking destinations in Britain, attracting around 11,000 end-to-end walkers each year. The wall stretches from Ravenglass in Cumbria to South Shields, and was officially made a World Heritage Site in 1987. 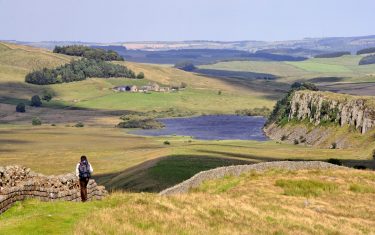 The historical significance of the site cannot be overstated; Hadrian’s Wall marks an era of British history that was truly formative in the development of the nation, and the fact that many sections of the wall have survived nearly 2,000 years of weathering on the Scottish borders is both a marvel and an archaeological gift. It may be becoming quickly evident to you that we’re big history fans here, but really, is there anything better than walking alongside the lives of generations and generations of our past? We don’t think so.

Just by finding yourselves here, we can tell you’re all learned folk of impeccable taste, but just in case the whole Roman-invasion-of-Britain-and-suppression-of-the-Celts-and-subsequent-several-centuries-at-the-tip-of-the-Roman-Empire-before-the-fall-and-dissolution-of-the-whole-Roman-civilization thing has passed you by at all, here’s a quick recap of how and why Hadrian’s wall is so significant:

In 117 AD, after a lengthy decline of health, Emperor Trajan died with no official heir. The subsequent succession of our protagonist, Hadrian, is a matter of some historical debate, as scholars argue over whether Trajan truly did pronounce him his successor, or whether Hadrian’s rise to power was thanks to Trajan’s wife, Pompeia Plotina. At any event, Hadrian found himself filling big shoes, and by 122 AD he had taken the traditional PR improving trip to the wild and mysterious land of Britannia (don’t laugh, the Roman’s though we were very exciting). The visit prompted him to order the building of the wall, named in his honour, to separate the civilised Romans from the barbarians in the North. It was built to control the northern frontier of the Roman expansion, and protect its boarders from raids and organised attacks. Essentially it was The Wall from Game of Thrones, just imagine Jon Snow dressed as a legionnaire. Building the wall was a huge undertaking; it took 15 years, and sons followed fathers into guarding the wall. Eighteen thousand soldiers worked on it, and 4 million tonnes of stone were used. It served as a frontier for several Roman incursions into Caledonia.
Though the northernmost point of Roman advancement into Scotland is awarded to the Antonine Wall, a 60-km long fortification in Scotland, started by Emperor Antonius Pius in 142 AD as a further push on the Roman Limes in Britain, the Antonine Wall has fared relatively poorly in terms of conservation. Hadrian’s Wall is a striking example of the organization of a military zone and illustrates the defensive techniques and geopolitical strategies of ancient Rome. It’s place as the most popular tourist attraction in Northern England is a well deserved place in the heart of British heritage.

Despite its historical basis, Hadrian’s Wall is still a thriving location for national and international visitors, home to a wide variety of events from large festivals and Roman re-enactments to country fairs and quirky local events like the Bardon Mill and Roman Empire Conker Championships.

Celtic Trails offers truly stunning walks along the Hadrian’s Wall Path, and if you’re interested in visiting this beautiful, historical location then check us out. With several different packages to choose from, Hadrian’s Wall truly does have something for everyone. Why not take advantage of this amazing destination this summer?