The Shape We’re In

Research from Public Health England suggests that a large number of the population do not manage to fit in 10 minutes of walking, once a month.

The NHS has come back and stated that “we walk an average of 15 miles less a year than we did two decades ago, we’re 20% less active than we were in the 1960s, and those in the 40-60 age bracket are more likely to miss out on regular exercise”. 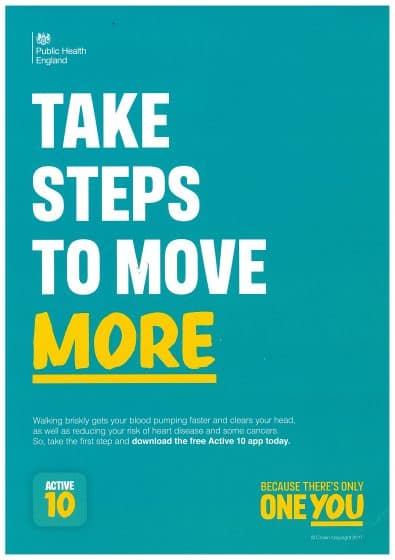 The trouble with these statements, is that while we all have an idea of the benefits of regular exercise, keeping fit for its own sake does not work as a motivation tool for everyone, and most people will tend to reject a one-size-fits-all approach to getting in shape.

The new government scheme, ‘Active10’ encourages the idea that exercise can be fitted into the most busy schedules – they’ve got an app that takes away the guesswork. You don’t need to undergo any intense workouts to get started – and there’s no legwarmers/lycra either.

We need to come round to the idea that our lifestyles may be more unhealthy that we think, although it’s not about feeling guilty – it’s about making small changes to the day to day in order to feel the positive effects in later life.

The idea of getting back into fitness can prove daunting, especially when you consider the new challenges that getting older can bring. Not to mention that juggling exercise with the priorities of everyday life can often mean that maintaining a health level of fitness takes a back seat.

We all know that exercise is good for you, but not everybody can stomach the gym, and it isn’t necessary either. There’s a lot of guilt attached to getting back into shape, and more often than not that can prove counter-productive to making any meaningful changes.

But when it comes to getting moving, the activity itself is its own reward. Walking can be a vehicle for experiencing the beauty of the countryside, forming closer bonds with family & friends or simply just getting away from it all. ‘Exercise’ is a broad term, and the best way to do it is to find something that doesn’t feel like ‘exercise’ at all.

We’re all aware of the physical benefits of getting back into shape, and if you’re somebody who regularly suffers from insomnia then even 30 minutes of physical activity can help calm restless nights. This is meant to trigger a snowball effect; starting with a conscious decision could be the first step to building a habit that could change your life for the better.

So you’re making headway, but the trick is keeping on top of it. Something simple, say putting an X in the calendar every-time you manage to meet a goal is a great way of tracking your progress. As the saying goes, ‘that which is measured gets improved’, but the emphasis should be on what works for you. Consider joining a group, having that level of support makes meeting new goals much easier when you don’t have to self-evaluate.

It’s never too late to start walking, try something out – see what works for you. It’s not even about over-exerting yourself either, The National Institutes of Health study that followed 250,000 men and women between 50-71 found that those who were just slightly active but didn’t manage to exercise 30 minutes five times a week, were still 30% more likely to be healthier in later life than those who were totally inactive.

Take a look at our: Walking Holidays for Beginners

Get started with the ‘one you’ quiz: https://www.nhs.uk/oneyou/hay#UMBwMUhZ7ZWREa1L.97

2 thoughts on “Walk Yourself Healthy”